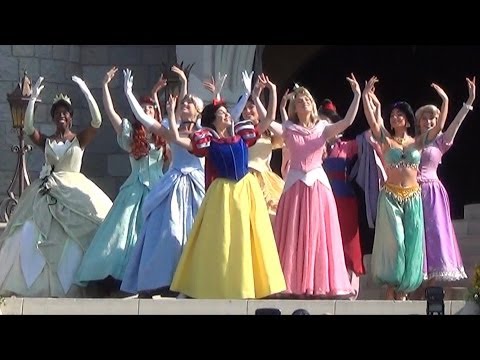 Check out our YouTube show MouseSteps Weekly: https://www.youtube.com/playlist?list=PL2395F3534D2AFF0E Princess Merida from the film Brave becomes the 11th Disney Princess, and was welcomed today to the royal fold. The ceremony begins with the introduction of the Disney princesses, and Merida riding in on her horse Angus. As a special bonus, the video ends with a lineup of the Disney princesses (including Ariel, Belle, Cinderella, Princess Aurora and Rapunzel) up-close in the garden for photos! Gabby Douglas and her mom were also part of the event. Visit our websites: http://MouseSteps.com http://JWLMedia.com Follow us on Twitter: http://twitter.com/Mousesteps http://twitter.com/JeffLangeDVD Follow us on Facebook: https://www.facebook.com/pages/Mousesteps/109846392426483 Follow us on Pinterest: http://pinterest.com/mousesteps/ http://pinterest.com/jefflangedvd/ Subscribe to our channel on YouTube: http://www.youtube.com/user/JeffLangeDVD Video shot and edited by Jeff Lange.