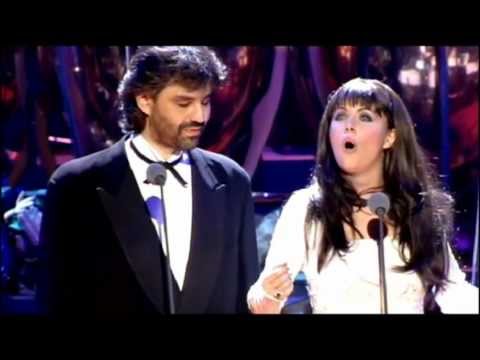 In November 1996, Andrea and Sarah Brightman were invited to perform the duet 'Time To Say Goodbye (Con Te Partirò)' at the farewell contest of the German World Light-Heavyweight boxing champion, Henry Maske. A national hero held in unrivaled esteem, he is known for his love of selecting entrance themes to his bouts. Sarah Brightman, the internationally renowned soprano and friend of Henry Maske heard 'Con Te Partirò' in a restaurant while dining with her friends. Entranced by the singer and the song, Brightman made contact with Andrea. Andrea and Brightman re-recorded 'Con Te Partirò' as the duet 'Time To Say Goodbye' with members of the London Symphony Orchestra. This live version is from Brightman's first full concert recording, "Sarah Brightman: In Concert", from London's Royal Albert Hall with the London Symphony Orchestra under the direction of Paul Bateman. Guest artists include Andrew Lloyd Webber, Adam Clark and Andrea Bocelli. The concert was released to video in 1998. The concert was directed by David Mallet.